Life as part of an Ouroboros

„It’s finally Halloween!” A young and overly joyous voice exclaimed as its owner ran down the stairs to get to the kitchen. Why the kitchen, you may ask. It was there that magic happened during this special day of the year. As the little girl entered the kitchen, she was delighted by the sweet fragrances of the desserts that her mother had prepared for them to enjoy. There was also a bowl with sweets and chocolates for the trick-or-treaters that were bound to come soon. The little girl was also excited to go trick-or-treating. Her father had promised to take her when he returned from work. It was about time… “I can see you eyeing the clock. It won’t make time go faster, you know?” Her mother spoke softly with a knowing smile as she leaned against the kitchen counter. The little girl pouted, ready to whine about how unfair this was, but her upcoming temper tantrum ceased when she heard keys jingle outside their door. Her mother also looked up, pleasantly surprised. “See?! Time does fly by!” The little girl retorted, making the adult chuckle as she watched her daughter dart towards the door to greet her father.

From what she remembered, that was an exciting Halloween day, but her memory of such times was dwindling. The little girl had grown up and, while she experienced many Halloweens, few ever resurfaced. Time was truly unforgivable if it dared rob them of their most precious memories. A reason for such a heinous crime could be that there were new experiences that needed to be stocked and piled up neatly to be reviewed later on. However, if that were the case, why couldn’t she just pick and choose which memories to keep? Why could she remember the exact taste of the delicacies she ate with her parents every Halloween day, but not her mother’s voice?…

“BOO!” The sudden shriek made the contemplating adult flinch. She was dreamily staring out the window at the falling leaves and the little kids dressed as ghosts and monsters when her own little ghost decided to spook her. She let out a dramatic gasp which made her daughter laugh enthusiastically. “Mooom, let’s go or there won’t be any candy left!” Her daughter whined which made her smile amused. The mother looked at the clock pensively. “Why don’t you go ahead with dad? I have to finish some work. I promise I’ll catch up” It didn’t take long to convince her daughter to start her journey earlier. After the two left, the mother peered out the window once again. She saw such pure joy in these kids that it made her wonder when such simple activities stopped delighting her.

Halloween was the day she usually thought back to her youth. It was as if her mind decided that this day would always be a trip down memory lane. She didn’t mind one bit, but it was quite infuriating to realize that her memory wasn’t the same as before. She wasn’t the same either. She wasn’t a little girl anymore, nor a troubled teen or a young mother. She was old. Old as time, as they say. But what was time, truly? Why did it affect them so? Why was their time on Earth finite? Why couldn’t they experience years and years of life? Perhaps because it’s mortifying. After all, what is more frightening than life? Life is the cause of everything, while Death ceases everything. Could death be more daunting than life? What is death but an end to a journey? She is not afraid of endings. She has witnessed plenty. Was it the cyclicality of it terrifying? Did the idea of living as an Ouroboros scare people? That was amusing. Life, death, rebirth. Weren’t the lives of humans just copies of their past selves? So why fear continuing your destined cycle? Why fear being part of an Ouroboros which refuses to let go of its tail? Human perseverance never fails to amaze her, but their stubbornness is what fascinates her. Perhaps it was finally time for her to let go of her Ouroboros. She was not afraid, but as she heard a knock at her door, she remembered a little girl, darting down the stairs, exclaiming that it was finally Halloween. 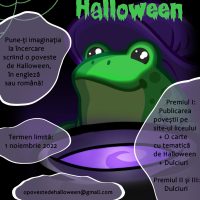